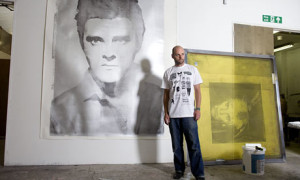 A Gap between speech and thought

If psychoanalysis depends on and incites “a knowing how to read”, Gavin Turk’s personal reflection on some of his more recent work raises the question of the power of any sort of order in a world of deep disorder, and offers a precious meditation of the role of the artist and of the art in our Hypermodern Times when the symbolic order undergoes a sudden implosion. 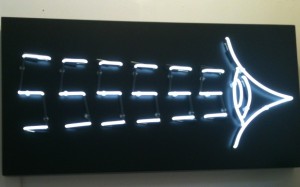 The function of the gaze : The Trompe l’œil effect

Following Gavin Turk, modern-art questions the representation of culture. The art collection could represent the art of our time, the culture of the missing object epitomizing a civilization of the universal market.

In his major solo exhibition – Ben Brown Fine Arts in London June 2013 – British Culture is left on the outside, as well as inside burnt ruins among ashes contained in works-of-art, many of which are presented as such in painted bronze.

Although ready-made art prevails in a post William Morris era, even this form of art is already transformed and self-destructive, it is not only depicted as a work-of-art but as one capable of self-destruction. Within it is strangely included a life already subsuming its own death. A ready-made object impersonalizes the gaze to a point that you might say that it reproduces a peculiar structure over and over again. The gaze is the discourse of art as Gavin Turk underlines, the audience in some ways makes the work. In other words, its meaning depends on personal interpretation.

This brings up two questions for the artist: how to draw a distinction between seeing and looking? If one sees from a single point, the artist’s subjectivity here remains the audience; it doesn’t simply depend on what you see but also on how you are looked at. The glance seeks for meaning and sees for catching information; this is why the gaze makes use of the structure of language even if, with art, it has no use for words.

The function of the letter

Gavin Turk’s artworks frequently bear his name or the capital letter of is own name. Is the artist questioning the symbolic function of the single letter (la lettre ) ? If the alphabet has twenty-six letters, you cannot ignore the existence of the alphabet itself. Without knowing it, the artist nonetheless perceived its first effects under the form of a huge, unknown shadow, the shadow of the letter A. Every displacement in the field of knowledge involves the preamble of its lacks.

Whereas the registration of the two capital letters of the artist’s signature placed in a frame among many eggs shell. 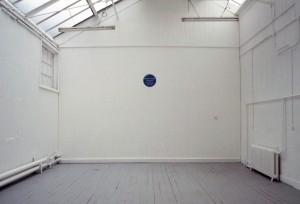 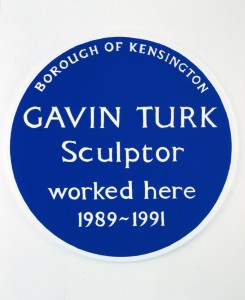 In 1991, Gavin Turk placed a blue heritage plaque with a deposit for the curator commemorating his own presence as a sculptor, stating « Gavin Turk worked here, 1989-1991« . In this installation titled Cave, it consisted of a whitewashed studio space.

Because of the time distortion, the installation induced impressions of being prisoners in Plato’s cave. Truth and falsity demonstrate the absolute opacity of bodily experiences. In sciences, these aspects of extraction do occur in a space beyond inside and outside, beyond true and false, beyond life and death.

With this installation, the artist’s playing on word uses this object as a thing (la chose), it refers of course to the bodily experience of life and death. The only form of symbolic time in that space misused the value of the object itself.

Significantly, the term [Cave] ultimately leads us to the allegory of the cave and to the idea of the soul as a feature of the body – the soul as sensation, the soul as a bodily experience and nothing more.

The artist knows the words but he seeks the form, the substance of which can be found in a new way of writing, a new narrative that appears only at the end of his first monograph and his major solo exhibition entitled The Years.

Term extraction, conceptual analysis as the artist’s know-how still lingered in my thoughts after leaving Gavin Turk in his workshop. Was it the vision of a white electric eye gleaming on the wall? As a prevailing drift act from in another scene (l’Autre scène), one behind the scene and which is the cause for desire, forever hidden, ensuring the link to the other by means of the ex-timacy of vision?

The outcome of this meeting was broadcasted on www.radio-a.com.