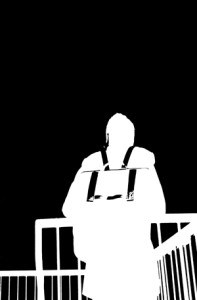 On the occasion of the follow-up of the symposium entitled

Tobira no mukô was screened at Paris Descartes University, on March 21st, 2013. The previous screening took place in Japan, in 2009. It is the first feature-film directed by Laurence Trush and produced by Saiki Takao.

When he is watching the movie, the spectator is immediately confronted with the reality of the young Hiroshi. One might say that this young subject represents a human being squashed by the logic of the Utilitarian doctrine. He is facing a gap introduced by initial failings in symbolic structure of our postmodernity.

In this movie, the hikikomori syndrome stands like a breaking point, like a symbol of the category of the real. The Japanese society is forced to face the syndrome of social withdrawal, although it previously denied its existence. Because it reflects social isolation, hikikomori was a hidden and underestimated problem.

Laurence Thrush is a film-director who believes in the psychic structure. In a sense, he is encouraging us to look at how the subject handles his relationship with the social Other. He captures with sobriety the daily mundane life of the 21st century, between failures and condition of jouissance. In our hypermodern times, the decline of reliable Ideal Other pushes the symbolic structures around the discourse of science and of capitalism. This fact promotes optimization processes, as it allows profit driven groups to generate private financial benefits. This, in turn, leaves room for earlier stricter selection criteria than in the past, for example in state education, academic and competitive examinations result in further segregation.

This tale between the screenplay and the real introduces horizontal human relationships in which the paternal control is lost. This latter’s exceptional function used to allow “the little man” to go beyond himself, as it used to have authority value.

The parameters of the social ties in the post modern era, characterized by the rise to the zenith of the object a, continually promotes practical ideals which encourages forcing people to adhere to unifying norms. In this respect, state education is presented here, as an attempt to force students to become homogenised in a group. This process substitutes the uniqueness of the human being for collective norms.

Left Handed – the English title of the movie – means that the young subject Hiroshi cannot make use of the Name –of- the -Father, which would allowed him to refer his position to the symbolic value. As he is not dominated by a phallic brilliance, Hiroshi is struggling with despair of being the object of exclusion. He is protecting himself from the Other. As far he is concerned, the Other is considered as a malevolent Other, it is therefore he expulses himself by withdrawing from His sight.

The artist‘s know how

In many scenes, emptiness stands around the object taken as a thing. Thus, the thing appears immediately itself stark- naked.

The scenography in many shots shows scenes in which the object arises. There is an empty vacuum between the object itself as an isolated thing and its meaningful representation, as, for example, the image of a pair of sport-shoes.

He captures, in or out of scope, a world that must be fought. Oppressive spaces are sometimes fractured with some objects: such as a banister, a staircase representing a border.

One begins to question his cinematographic art as a singular writing of a know how with the object-glaze facing fascinating blind hole.

A conversation with Saiki Takao

The act of filming

Tobira no mukô is a fiction where the actor and common people bring a different form of presence, connecting scientific objectivity with subjectivity’s uniqueness.

From the road emptied of its inhabitants to the protected house, the vision through the drawn

sun-blinds creates a tension between two kind of visions, as a way to distance oneself from the reality.

In front of what is Laurence Thrush stopping?

Is it in front of the sudden upsurge of the thing, like as a pair of sport-shoes in condition of waste objects, placed on top of furniture, or like the staircase’s balustrade, when the young Hiroshi is puzzled by the vision of emptiness?

Are these series of scenes meant to support an objective value, by showing an aspect of reality, as the refection of an expert’s perspective or do they have different function?

Does Laurence Thrush act as a reporter or as a film-maker?

Does the artist’s know-how move from the objective value as a reflection of the truth?

Does he by using his art of film-writing, overcome a tension between the interests of the subject and the worldly interest?

Laurence Thrush seems to be a witness of perceived experiences which generate unique emotions. He makes them visible and accessible to all, although a distinction has to be drawn between the spectator’s fantasies and that of the author.

Does Laurence Thrush’s movie help the spectator project himself in order to feel something that is intimate, such as fear, despair or feelings of loneliness or isolation?

Status of the colour

Using black and white brings into play the object-gaze. The visual effect captivates the eyes and gives the opportunity to look at the world through the artist’s lens and understand their place in his world. With the black of the shadow, the scene falls naturally down as does the gaze.

The question here is, does emptiness have a colour?

The status of stage directing

The act of directing is to try to make more readable the unbearable. Drawing the attention of the spectator at the same time, the real is not captured stark-naked but with a veil, showing us that the more the visible is caught, the more it seems to escape the eyes.

Laurence Thrush’s way of filming documentary as fiction stands at the crossroads of two perspectives. Between the unifying vision of the world and his unique take on things, we have the perspective of a singular know-how. Although Hikikomori reflects a behavioral disorder, Laurence Thrush does not feel like, he can stand at the threshold. He foresees that 21st century’s subject will interact on the mode of One alone “Un tout seul”.

Left Handed therefore is the image of pure existence of what is becoming.

In conclusion, it is a sequence of new militant form art in the context of our postmodernity, as the result of an anticipation which exposes new openings of subjectivity. “The new militant art “illustrates therefore that film-art in the eye of the beholder, is a way to resist to a standardised perspective.

The outcome of this meeting was broadcasted with René Fiori on www.radio-a.com.